Langkawi, officially known as Langkawi, the Jewel of Kedah (Malay: Langkawi Permata Kedah), is a district and an archipelago of 99 islands (plus five small islands visible only at low tide) in the Malacca Strait. some 30 km off the coast of northwestern Malaysia. The islands are a part of the state of Kedah, which is adjacent to the Thai border; the islands are a few kilometers south of Ko Tarutao. On 15 July 2008, Sultan Abdul Halim consented to its change of name to Langkawi Permata Kedah in conjunction with his golden jubilee celebration. Langkawi is an administrative district with Kuah as its largest town. Pantai Cenang is the most popular beach and tourist area in Langkawi, with tens of thousands of visitors each year. Langkawi is a duty-free island. 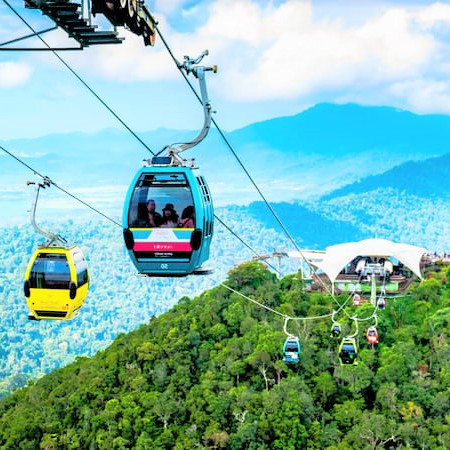 The name Langkawi is thought to have existed by the early 15th century, although in the 16th century the island of Langkawi was also marked on maps variously as Langa, Langka, Lansura, and Langapura. There are many suggestions for the origin of the name Langkawi. According to one interpretation, Langkawi means island of the reddish-brown eagle, a Brahminy kite in colloquial Malay. The Malay word for eagle is helang (colloquially shortened to lang), and Kawi is a red stone used as a chalk to mark goods. This interpretation was used to create the landmark sculpture of an eagle as the symbol of Langkawi at Dataran Helang (Eagle Square) in Kuah.  Some believed that Langkawi is the same as, or related to, the Lanka or Langkapuri mentioned in Indian sources. This ancient name Lanka (or Lankapura and Lankapuri) is found in Indian literature from an early period (named in Ramayana as the city of the king Ravana), although the identification of the original Lanka is not certain. Puri or Puram in Sanskrit means a town or city.

In 2008, the then-sultan of Kedah, Abdul Halim Mu'adzam Shah, conferred the title of Langkawi Permata Kedah (meaning 'Langkawi, the Jewel of Kedah') upon the island as part of his golden jubilee as an affirmation of Kedah's ownership over the island.

Langkawi had long been at the periphery of but closely associated with, the domain of the Kedah Sultanate. Legend tells of a great snake ular besar, the custodian of the Langkawi Islands, to which a new king of Kedah must sacrifice a virgin daughter whenever he ascended the throne, or when war was declared with another state. The Mao Kun map from Wubei Zhi, derived from the 15th-century navigation maps of Zheng He, shows Langkawi next to Penang Island.

The island of Langkawi was recorded in history by various travelers to the region. It was called Lóngyápútí in the 14th century by the Yuan dynasty traveler Wang Dayuan. When the Ming dynasty admiral Zheng He visited the region, the island was marked as Lóngyájiāoyǐ, on his map. In the 15th century, it was known to the Acehnese as Pulau Lada ('Pepper Island'). In 1691, the French general Augustin de Beaulieu recorded going to the island of "Lancahui" (Langkawi) to buy pepper, and de Beaulieu was required to obtain a license from Kedah's heir apparent in Perlis before the penghulu or chief of Langkawi would sell pepper to him.

Langkawi was historically home to Austronesian peoples, such as the orang laut or sea people originally from the southern part of the Malay Peninsula and Malay people. It had been thought to be cursed for a couple of centuries. According to local legend, in the late 18th century, a woman named Mahsuri was wrongfully accused of adultery and put to death. She placed a curse on the island that would last for seven generations. Not long after Mahsuri's death, in 1821, the Siamese army invaded Kedah and attacked Langkawi. In the first attack, the locals burned down the granary at Padang Matsirat to starve the Siamese army. The Siamese nevertheless captured the island in May 1822, killed its leaders, and took many islanders as slaves, while others fled. Before the Siamese invasion, there was an estimated island population of 3,000–5,000, and only a small proportion was left after the invasion.

The island was recaptured from the Siamese in 1837. In 1840–1841, the Sultan of Kedah, who went into exile after the Siamese attacks, was allowed to return by the Siamese. Langkawi islands' population recovered afterward. However, the Orang Laut who fled after the Siamese attacks did not return. In 1909, the islands came under British rule following the Anglo-Siamese Treaty of 1909. The middle of the channel between Tarutao National Park and Langkawi became the Siamese border, with Tarutao to the north forming part of Siam, while the Langkawi islands to the south came under British rule. During World War II, Siam took control briefly as British Malaya fell to the Japanese.

Langkawi was a haven for pirates who attacked junks in the northern part of the Strait of Malacca. In a series of operations, between December 1945 and March 1946, the British cleared the pirates' land bases on Langkawi and Tarutao. The British continued to rule until Malaya gained its independence in 1957. Langkawi remained a quiet backwater until 1986, when Prime Minister Mahathir Mohamad transformed it into a major tourist resort, helping to plan many of the islands' buildings himself. Mahsuri's seven-generation curse was said to have lifted as a seventh-generation descendant of Mahsuri, then living in Phuket Province, was born. The island rapidly grew as a tourist destination, and by 2012, it received over three million tourists a year.

Langkawi, a cluster of 99 islands separated from mainland Malaysia by the Strait of Malacca, is a district of the state of Kedah in northern Malaysia and lies approximately 51 kilometers (32 mi) west of Kedah. The total landmass of the islands is 47,848 hectares (118,230 acres). The main island is about 25 kilometers (16 miles) from north to south and slightly more from east to west. The coastal areas consist of flat, alluvial plains punctuated with limestone ridges. Two-thirds of the island is dominated by forest-covered mountains, hills, and natural vegetation.

The island's oldest geological formation, the Machinchang Formation, was the first part of Southeast Asia to rise from the seabed in the Cambrian more than half a billion years ago. The oldest part of the formation is observable at Teluk Datai to the northwest of the island, where the exposed outcrop consists of main sandstone (quartzite) in the upper parts and shale and mudstone in the lower parts of the sequence. The best exposure of Cambrian rocks (541 to 485 Ma) in Malaysia is the Machinchang Formation, composed of quartzose clastic rock formations, in Langkawi; the other known example, the Jerai Formation, emerges near the west coast of Kedah on the mainland (Peninsula). Geologically, all these rocks are in the Western Belt of peninsular Malaysia, which is thought to be part of the Shan–Thai Terrane.

Only four of the 99 islands are inhabited: Langkawi (Pulau Langkawi, the main island), Tuba, Rebak and Dayang Bunting. The population is approximately 99,000, around 65,000 of them in Langkawi, of which 90% are Malays. The other ethnic groups consist mainly of Chinese, Indians, and Thais.

Standard Malay is the official language. English is widely spoken and understood by the locals. Most natives speak a Langkawi variant of Kedah Malay, with minorities also speaking Chinese, Siamese, and various Indian languages.